﻿Get to Know Rob﻿ 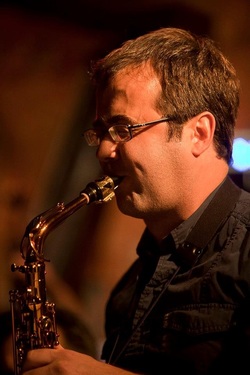 Saxophonist, composer, and music educator Rob Wilkerson is an Albuquerque, NM native based in Brooklyn, NY since 2001. Rob is currently a member of Darcy James Argue’s critically acclaimed and Grammy-nominated big band, Secret Society, and Alan Ferber’s Big Band (nominated for Grammy awards in 2014 and 2017). Since 2005 he has toured the world playing alto and flute as a member of Warner Brothers artist Michael Bublé’s band, including appearing on Grammy and Juno award-winning albums. Rob has been a featured soloist with the New Mexico Symphony Orchestra, performs regularly with the Chelsea Symphony in NYC, and performed Michael Tilson Thomas’ “Four Preludes on Playthings of the Wind” with the Philadelphia Orchestra in 2018. He has appeared at jazz festivals all over the world including multiple performances at Newport Jazz Festival with Darcy James Argue’s Secret Society. As a doubler, regularly played the woodwind book for the Tony award-winning Avenue Q from 2017-2019. Rob holds a B.A. in Saxophone Performance from the University of New Mexico, and a master's degree in jazz studies from the University of North Texas, where he played lead alto in the One O’clock Lab Band. Rob has taught classical and jazz saxophone for undergraduate and graduate studios at the University of Wisconsin-Whitewater, Boston University, and University of North Texas; and he is currently an adjunct professor at The Hartt School at University of Hartford. Rob is a Selmer Paris Performing Artist and a Vandoren Artist.